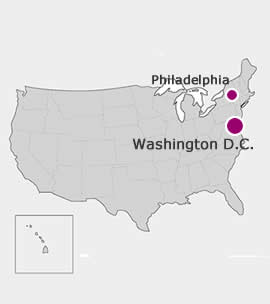 Our school is located in the city centre of Philadelphia. It is a young, newly renovated school with a great atmosphere where you can make friends from all nationalities. The school has no cafeteria, however there is a refrigerator and microwave in the student lounge to keep your food cool and heat your own food, as well as many cafes and restaurants located in the vicinity of the school. The teachers will help you acquire the necessary skills so you can develop your English properly. In the evenings and in your free time, you can you sign up to extracurricular activities that the school organises.

Accreditation: the school is accredited by the Council for Continuing Education and Training.

A friendly and accessible city with magnificent history and culture.

Usually it is a residential town, consisting of a wide variety of neighborhoods, each with their own traits and characteristics that differentiate them from others. Its streets are distributed following a perfect grid, guided by two main streets: Market St crosses the city from East to West, while Broad St does the same from North to South. This makes it very difficult to get lost. Philadelphia is also a renowned center of culture with its museums, galleries and historic monuments and is home to 10 major universities.

Things to see and do in Philadelphia

Things to do in Philadelphia

At night in Philadelphia

Throughout Philadelphia, you will find plenty of dance, comedy, jazz, rock and R & B clubs, as well as several bars with very specific styles.

The Old City is a cultural and culinary precinct with more than 100 restaurants offering all kinds of food, American and foreign. Spread over the streets you can find a variety of local customs, from sites specialising in regional cuisine to Italian, Cuban, Spanish, Chinese, English, Moroccan, Japanese or even Indian.
Other interesting places to eat are Chinatown and Chesnut Hill. You'll have to try the famous 'Philly Steak', a typical Philadelphia sandwich with meat and melted cheese.

Class in the morning or afternoon

No VISA F1 is required

Ideal for those that want to spend their time studying and enjoying their free time visiting the city and sightseeing.

The general English course has a minimum duration of 2 weeks with 3 hours of English classes per day, 5 days a week. The rest of the time is for you to do what you like, other activities such as sightseeing, participating in social events at the school or staying with your new friends.

This is a combination of the standard course of 20 lessons per week + 7 structured study sessions: these sessions will help to reinforce what you have learnt and improve in the areas you need to the most, using books, language exercises online and interactive programmes.

Ideal for those that want to make the most out of their stay studying in the academy in the mornings and afternoons.

The Semi-intensive English course focuses on 4 main aspects of language: reading, writing, listening and speaking. You will also learn vocabulary and grammar, how to speak in formal and informal discussions, interviews etc.

This course is a combination of the general 20 lesson course + 8 lessons of specific skills (including vocabulary, culture etc) and 7 lessons of structured studying which will help reinforce what you´ve learnt and improve the areas that need most practice - with the use of selected books, language exercises online and interactive programmes.

For this course, F1 visa is needed

Ideal for those that want to make the most out of their stay, studying in the academy in the mornings and afternoons.

The objective of this course is to reach fluency in English and learn grammar and vocabulary that can be used in daily conversations.

This course is ideal for students interested in getting their TOEFL. It is the most popular spoken and written English exam in North America.

The course will give you academic skills and a level of English that you need to be prepared for the exam. You will practice reading, writing, listening and speaking, as well as practicing exam style questions and doing simulation tests. You will get used to the model of the exam and its structure, whilst practicing and improving your level.

The school organises a varied plan of extra activities. You can sign up to whichever you prefer. Some activities are free, some you need to pay. Participating is an optimal way to make new friends and practice your English.

Homestay accommodation is ideal for students who want to immerse themselves in a different culture. By sharing meals with your hosts every day, you'll benefit from speaking English in relaxed, natural situations. Families don´t live in the center. This means that to get from the family home to the school, you will have to take public transport.

Families can be traditional families with or without children, or single parents. All host families are carefully selected to provide a safe and welcoming home environment.

School distance: 20 to 50 minutes by bus or walking

From the airport to the city

Trains, buses and minibuses will drop you at the door of your destination, and taxis connect the airport with the urban area.

The train ride takes about 20 minutes to the city centre.

There are bus connections to the train station (Amtrak's 30th Street Station) and the Greyhound bus station. There are several bus lines and some have a faster service with fewer stops.

In the baggage claim area of each terminal you will find information on transportation (tel. (215) 937-6958)